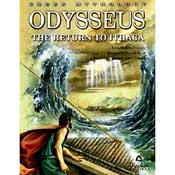 After the fall of Troy, the Greeks set out to return to their homeland. But it would take Odysseus, the ingenious man responsible for their final victory, another ten years before he could set eyes on his beloved Ithaca. Ten years of relentless struggle against vengeful gods, horrifying monsters, murderous sirens, fierce giants and treacherous women of astonishing beauty, but also against his companions' greed and thoughtlessness and his own weaknesses. Read about the cunning hero's breathtaking ordeals in this captivating adaptation of the Odyssey by Sirmo Kapoutsi, vividly illustrated by Nestoras Xouris.