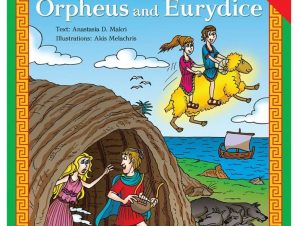 PHRIXUS AND HELLE ORPHEUS AND EURIDICE

Phrixus and Helle Phrixus and Helle were the children of Athamas, king of Orchomenus in Boeotia. Their mother was the beautiful Nephele, who died at a very young age. The king married again, to a woman named Ino, who was extremely jealous of the two children. So Ino came up with a plan to take the kids out of the picture. However, the love of their dead mother, Nephele, protected Phrixus and Helle. What would be the fate of the two siblings? Orpheus and Eurydice Orpheus, son of the muse Calliope, was a young, talented musician and poet. As soon as he met the beautiful nymph Eurydice, he fell head over heels in love with her. Unfortunately, poor Eurydice was bitten by a snake, and she died. And so the two lovers were separated, and Orpheus was devastated. What could he do to cope with the loss of his beloved? Is love enough to ensure that two people will never be separated from each other?