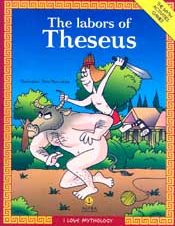 THE LABORS OF THESEUS-I LOVE MYTHOLOGY

Theseus was one of the most admired ancient Greek heroes. He was the son of king Aegeus and princess Aethra. On his way to meet his father in Athens, he managed to clear the road on land from the vicious robbers overrunning the area. He also unloaded Athenians rather efficiently from a heavy burden before becoming their king. His feats were great, but also as a king he made some rather important decisions for the future of his land. This book comprises several activities and games helping young readers consolidate the basics of Greek mythology.