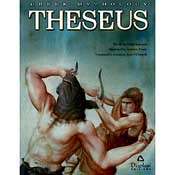 Theseus, son of Aegeus, king of Athens, was one of the Ancient Greeks' greatest heroes. From his teenage journey to his father's city, during which he confronted and defeated many terrifying villains, to the vaults of the Minoan Labyrinth and the slaying of the monstrous Minotaur, to his wise reign and the unification of Attica's settlements into a greater Athens, he led a life full of grand deeds and daring endeavours, but still not without romance or tragedy. Read about the fearless hero's breathtaking adventures in this captivating adaptation of Greek mythology by Sirmo Kapoutsi, vividly illustrated by Nestoras Xouris.